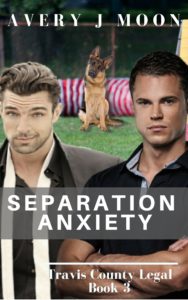 Max Cooper’s first solo run to a bar without his long-term wingman didn’t go so well.

Actually, that was probably the understatement of the year. It was a disaster.

If it hadn’t been for the handsome stranger stepping in, he might not have made it out of that bar.

Unfortunately, just making it home wasn’t the end. Now the psycho from the bar was stalking him. The bad news was he had no proof, or witnesses, to back him up.

He was on his own.

Max didn’t like the new feeling of insecurity, so decided to do something about it. Get a dog. A big one.

The problem with his plan? His dog had issues of his own.

Separation Anxiety is a slow burn MM Gay Mystery Romance and the third book in the Travis County Legal Series. It has a happily ever after ending and no cliffhanger.