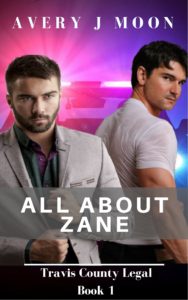 All About Zane (Travis County Legal Book One)

(Book One Free at Most Retailers)

Colin Shepard knew the exact second his twin sister Becca died. He was free-falling from a plane at the time. He cheated his death, but was left a very broken man.

Two things kept him going through the pain: Keeping his promise to Becca and raising her son as his own, and bringing her killer to justice.

But he was going to need something he hated to ask for. Help.

Sheriff Gabriel Green had done the right thing all his life. Part of that included on the job, working on a case that led nowhere with no clues or leads. Justice still needed to be found. But with the case of Becca Shepard’s disappearance, it seemed a long way off, and getting longer by the day.

Then Colin came back to town and things started heating up. And not just on the case…

All About Zane is a slow burn MM Gay Mystery Romance and the first book in the Travis County Legal Series. It has a happily-ever-after ending, no cliffhanger, and a great steamy get together scene worth waiting for.