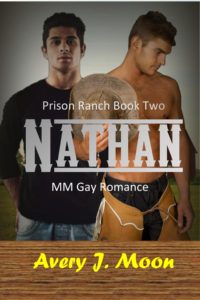 Everyone always made the assumption that Nathan and his twin, Mason, were just alike. They could not be more wrong. Their only similarities were their looks.

Mason was an Alpha. Nathan was an Omega, but only for one man…Ricky Sanchez. Unfortunately the love of his life had married another years ago with not a single word of explanation.

Nathan’s life had been a series of one night stands ever since.

He hadn’t been able to tell his lover, Nathan, the reason he married Carmella. Not back then when it mattered most.

But now Carmella was gone and he was hoping against hope that the truth would ignite the flames of their love once again.

So when Nathan gets assigned to work in the stables at the ranch, he is shocked to find that his new boss is none other than his former lover.  And to complicate things further, now he has a five year old daughter.

Trouble is, little Nattie has a way of getting under his skin. And maybe a way of healing a crushed and mangled heart too.

Nathan: Prison Ranch Book Two is an MM Gay Romance novella of almost 12,000 words intended for mature readers. With, of course, a happily ever after (HEA) ending!