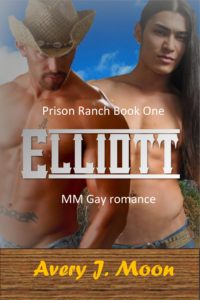 When Elliot Sanderson was sentenced to prison, he thought his life was over. But the judge gave him an offer he couldn’t refuse.

Elliott, his two brothers, and three other inmates would serve their time as ranch hands. Elliott figured hard work and sunshine beat a prison cell any day of the week. He was sure he could stay out of trouble, at least until he saw the rancher’s son, Brandon.

Elliott had dated a lot of men and would have sworn he didn’t have a preferred type.

He would have sworn wrong.

But as long as they kept the rancher’s son far away from him, he could still make this work. After all, it was only for six months.

Then they made them partners.

He was damn sure not going to let that happen again.

Until he started falling for the convict.

Note: This is an 11,900 plus word MM Gay Romance story with an explicit man on man sexual scene. As such this story is meant for a mature audience. If that offends you, then this book is not for you. However, if you are in the mood for a good Gay Cowboy Romance, why not give it a read?

Find it on iTunes

Find it on Kobo

Find it on Nook